ELLIJAY, Ga. – With the bid for demolition awarded and proceeding, the county is starting to look closer at the projects designs and details as they prepare to take the next step towards construction of the pool design in the coming months with bids for construction.

However, a Special Called Meeting this week saw the BOC revisiting the design aspect of the pool. Many things have changed since the plans for the pool were presented to the county. While the county approved a proposal in June 2019 to have Premier Pools & Spas be the pools designed and a design was presented, County Attorney David Clark has recently informed the Commissioner that no actual approval or adoption of the design was given.

So, in preparation of bidding out a design for engineering and construction, the Commissioners set to discussing that design this week. The largest topic debated this week became the depth of the deeper end of the smaller “splash” pool. While plans originally had the deepest section of this at 2.6 feet, according to County Commission Chairman Charlie Paris, aerobics and therapy classes need this to be 4 feet deep.

The county went through discussions on several design changes and ideas, debating pros and cons of each. Some of these included combining the two pools, making part of the lap pool more shallow for this, creating to “L”s on the pool similar to the county’s old pool, and simply altering to splash pool. The discussion also grew to include general changes to the aquatic center idea for the county including covering both pools and heating both pools for year round access.

The project has also seen other changes, Paris confirmed after the meeting that placing the pool in the same location as the old one would obviously not allow for the full recreation center originally planned and designed. However, he did say this hasn’t killed that idea, but rather forced it further down the line to possibly placed elsewhere. Regardless, the county is focusing on the pools design at this time. 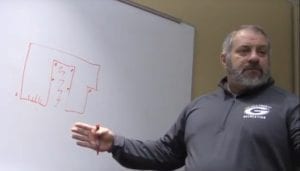 Considering all of these changes, the options will be sent to Premier to redo the pool design, through the numerous discussions, the Board will be sending the changes and are expected to be ready for the March meetings. Current understanding is that while the pools will still be separate, the “Rec Pool” and the “Zero-Entry Pool,” as the county decide to call the main pool with lanes and the smaller, shallower pools respectively, will see other changes.

The Rec Pool will be 5 feet deep instead of previous reports of four feet and, at one time, four feet in the middle and five feet on the ends.

The Zero-Entry Pool will slope down for nearly half of the pool and have a four feet deep area for aerobics and activities. It will also be squared off instead of the rounder shape in previous designs.

While these changes are the understanding from this special called meeting, nothing is finalized until the design is brought back before the county in March and approved.