ELLIJAY, Ga – “Misplaced priorities” is what Travis Crouch, a local citizen, a former business owner in the county, and former Post Commissioner, called a preview into next year for the county.

That comment came for one specific project as Crouch’s first spoke in the Citizens Wishing to Speak section on two bridges over Rock Creek in Cherry Log that are constantly being used by county vehicles over the bridge weight limit. Crouch said he noticed last fall that the weight limits had been reduced. 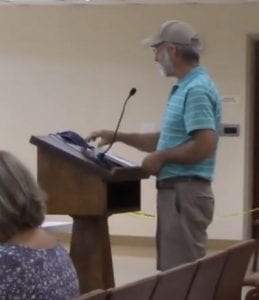 Travis Crouch speaks to the Gilmer County Board of Commissioners about Roads and Bridges and bridge weight limits during a Special Called Meeting in August of 2020.

He said that he understood the previous plan had been to use TSPLOST to repair these. However, as the TSPLOST had been rejected by citizens, his question was how the county planned to address the issue of the bridges.

He compared the 11-ton weight limit on the higher of the two bridges to several standard vehicles that need to cross the bridge. A dump truck delivering gravel weighs around 56,000 pounds on the low side (about 26 tons). A propane tank truck is 30,000 pounds (15 tons). A county fire truck, or tanker truck, is over 60,000 pounds (30 tons). He said that if they were condemned like Lower Cartecay Road, he would be completely isolated and cut off from vehicle traffic.

County Commission Chairman Charlie Paris responded by giving a preview into his personal look into the 2021 budget process saying that he has tried to get salaries up over recent years, but wants to focus on roads and bridges in 2021. Paris said that he is wanting to find a way to allocate more resources to the area of roads and bridges in the budget process, but that is going to entail some sacrifices in other areas. Some of those areas are already seeing relief as Paris noted the CARES Act Grant is being used to support needs in the Public Safety Department. Other areas will see needs prioritized and possibly delayed. Paris gave the example that the Sheriff’s Office may not be able to get a new vehicle in 2021.

These are all examples that the Chairman gave of his own expectation and plan. All three Commissioners will be sitting through these budget meetings as they historically do every year in October. On top of that, Paris also stated that the process would not be solved in 2021. Fixing bridges and roads and getting them to the condition that is desired, he said, “It’s going to take a number of years.”

Because of that, even the roads and bridges will need to be prioritized for attention. Paris said bridges like the ones that Crouch spoke of would definitely have to be a higher priority.

Considering the process and issues the county has had in the past, Crouch asked the board to begin processes and looking into the bridges now. He considered things like permits, easements, engineering, repair needs, and other things that could be taken care of early to attempt to make the process as quick as possible.

One example of the length these projects could take is highlighted at a higher extreme as the county has gone through a lengthy process and is still looking towards state completion of replacing the Lower Cartecay Bridge, a project that has gone on for years since its closure in 2017. However, Public Works Director Jim Smith did confirm that the county has other bridges in similar status, built decades ago and sitting on “stacked rock” as they said in the Special Called Meeting.

Before leaving, Crouch asked one final question about roads and bridges in comparison to another county project. The project that he later in the meeting called, “misplaced priorities.”

Crouch asked if the county should really be building a new pool with such needs for roads and bridges.

Paris noted this back and forth as he said running the county is a balancing act between people and their wants. He said that he agreed that the amount the county will spend on the pool won’t do much for roads and bridges as they are so expensive.

Paris stated, “I believe that the swimming pool is essential to the youth of the county and that it needs to be built. If we decided not to, we probably wouldn’t see any difference at all in roads… because roads are so wickedly expensive.”

Crouch responded saying, “There is nothing more basic than public safety for responsibility for the Board of Commissioners… Years ago the commissioners were called Road Commissioners.”

Crouch said that roads and public safety are the primary tasks and responsibilities for the commissioners. He made a comparison between the two items calling the pool a “luxury.”

While discussion ended on the topic there for today, it is sure to re-emerge as the county draws closer to October and its marathon of meetings during the budgeting process.